How common is epilepsy in children? Any statistics on its worldwide incidence?

Epilepsy is one of the most common chronic neurological disorders in the world. It affects 1% of the global population and 1 in 200 children have epilepsy.

What is the difference between Grand Mal and Petite Mal types of Epilepsy?

Laser interstitial thermal therapy (or laser ablation), treats a specific cause of epilepsy, rather than a type. The lesions that can be treated with laser ablation are able to cause many different types of seizures and the decision as to whether laser ablation is suitable would be based on the structural abnormality and its location within the brain.

How does Laser Ablation work?

Laser ablation is a technique designed to destroy abnormal brain tissue in an extremely targeted manner, whilst causing minimal damage to overlying or surrounding healthy tissues. It is a method for treatment of epilepsy-causing or malignant lesions in deep and difficult to access areas of the brain.

Using a state-of the-art laser, we will be able to destroy the abnormal tissue with heat – directly targeted at the lesion. Real time imaging, provided by the new intra-operative MRI at GOSH, will allow us to see the lesion caused by the laser as it is occurring and thus protect surrounding healthy tissue as we can turn off the laser when the MRI demonstrates that the correct lesion size has been made.

Due to the minimally invasive nature of this procedure, patients will be able to be discharged after a one-night stay. This is opposed to the 10 to 14 night stay currently required for patients who have traditional open surgery for similar conditions.

Can this help in the management of epilepsy or does it cure epilepsy?

Laser ablation treats epilepsy-causing or malignant lesions in deep and difficult to access areas of the brain. Carried out successfully, laser ablation aims to treat the cause of epilepsy in a patient, thereby stopping the seizures. However, each individual case is different and needs unique management and follow-up care. For some patients, laser ablation will not be necessary as there will already be existing treatment that best suits managing or curing their condition.

What is its long-term impact?

As laser ablation is minimally invasive, patients will be able to be discharged after a one-night stay. It has been shown to have better outcomes for patients with a specific type of lesion, such as hypothalamic hamartoma, and also a quicker recovery time. By using this technology we will be able to reduce seizure burden and epileptic drug load. This gives children the best chance of improved quality of life and cognitive outcome.

Have you studied patients who have undergone this treatment and what are the outcomes?

GOSH expects to be the first hospital in the region EMEA to be providing paediatric laser ablation treatment in 2019. Our expert neurosurgery team at the hospital will also be undertaking ground-breaking research, looking into the cognitive and endocrine outcomes of patients who have had laser ablation. This has never before been studied and the team understand that this piece of work is vital to the continued success of the treatment. Several studies in USA have reported the results of this type of treatment in both adults and children and have shown excellent results. A recent study of hypothalamic hamartoma treated with laser ablation showed that 93% of patients were free of gelastic (laughing) seizures at 12 months post treatment.

As there are many different types and causes of epilepsy, this depends on the individual case being treated. In oncological cases, there may be a small chance of tumour regrowth. The vast majority of epilepsy causing lesions do not grow. Generally outcome at 1 year post surgery is a very good predictor of long term outcome. There are a small number of patients whose epilepsy returns later but this is unusual. 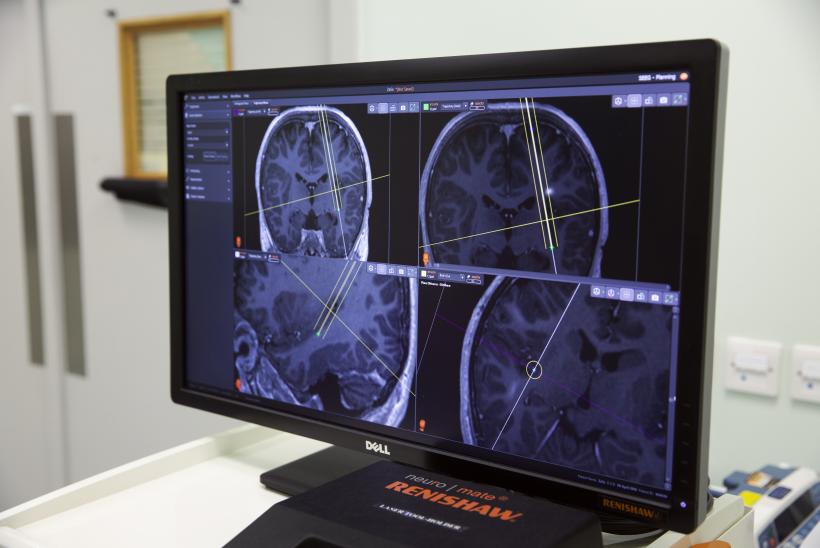 The Neurosurgery department provides a comprehensive tertiary service for children with disorders of the brain and spine that require surgical management. We offer surgical opinions, investigations and treatments for severe and complex patients 365-days a year. The Neurosurgery team sees one of the highest patient loads in the world, meaning that the team are experts in providing precise and experienced care to children with a range of neurosurgical problems. The team works in close partnership with colleagues from Neurology, Neurophysiology, Craniofacial, Neurodisability, the Children’s Epilepsy Surgery Service and Orthopaedics and Spinal to provide multi-specialty care with the child at the centre.